Dave Burbridge
I have a huge new respect
For Canadians, freedom
Is not free!

The7287678
Tucker Carlson is great reporting the real thing. He honestly defending the people’s civil rights. The truckers are heroes fighting not only for their freedom but for everybody’s freedom.

Cat Ritz
” When government fails to respect people’s rights, we all end up paying ” – Justin Trudeau, 2017.

MissE Mc
God Bless all the people standing up to be able to make their own decisions, work & live as they see fit!!!! So many of us support you & are praying for your success!!!

Jack
No words to describe the amount of disappointment I have towards the Canadian police officer.

Katherine L
This was a great segment Tucker. I’m so glad there’s some journalists on MSM who will report the truth. These Truckers have given the world hope and inspiration. They’re so many countries who are now going to form convoys because of them. We all owe them a lot. Thank you to all who are participating in this protest. The world thanks you!

403 Patriot
As an Albertan, thank you for supporting us.
I’m almost overwhelmed seeing truth broadcast for a change…especially considering Canadian media.

Cindy Wood
You cut off the part where they threw the 84-year-old onto the ground and dragged him over to his truck by his arm! Most disgusting display of police brutality I’ve ever witnessed! 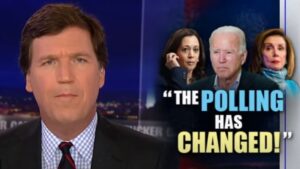