Pfizer Inc., known for its widely distributed COVID-19 vaccine, partnered with a Chinese Communist Party (CCP) payment platform that has been used to implement “vaccine passports” in China since the outbreak of the virus.

In a 2018 tweet, Pfizer praised the communist regime and the payment platform Alipay.

“We are proud to stand with China leaders & @Alipay to introduce new, digital solutions to improve disease education and vaccine access-creating a brighter future for Chinese children,” the tweet reads.

An accompanying graphic reads: “We are honored to be a partner in China’s ‘Internet + Vaccination’ initiative.”

The post revealed the pharmaceutical giant’s partnership with Alipay, a Chinese online payment platform originally founded as an offshoot of the CCP-linked company Alibaba.

According to Christopher Ford, assistant secretary for international security and nonproliferation at the U.S. State Department, Alibaba has been involved in the “research, production, and repair of weapons and equipment for the People’s Liberation Army (PLA)” and has a “deep record of cooperation and collaboration” with China’s “state security bureaucracy.”

Additionally, the State Department has flagged Alibaba as a “tool” of the CCP, aiding in its build-up of “technology-facilitated surveillance and social control.”

These ties did not dissuade Pfizer from partnering with the company in 2018, as the vaccine-maker’s annual review notes:

“We’re using the Alipay platform, which has over 700 million active users in China, to provide much needed education about disease and vaccinations. Additionally, to help China reach its ambitious 2030 goals to reduce infant mortality, we are exploring the use of the platform for mobile payments to improve convenience in Chinese Point of Vaccination centers, as well as options for installment payments that may reduce the financial burden for low income families.”

China relied on the Alipay platform to implement its vaccine passports. As The New York Times reported:

After users fill in a form on Alipay with personal details, the software generates a QR code in one of three colors. A green code enables its holder to move about unrestricted. Someone with a yellow code may be asked to stay home for seven days. Red means a two-week quarantine.

In Hangzhou, it has become nearly impossible to get around without showing your Alipay code. Propaganda-style banners remind everyone of the rules: “Green code, travel freely. Red or yellow, report immediately.

Recently. Alibaba was penalized by the CCP for failing to abide by new laws requiring the company to place the regime’s interests above its duty to report major cybersecurity vulnerabilities around the world.

Pfizer’s lobbying efforts hit an all-time high in the past year.

In fact, Washington, D.C., lobbying firms have been making big money from foreign countries trying to buy influence in order to secure American-made vaccines for their people.

The competition for scarce vaccine doses began even before any were approved for use, and intensified in the early months of 2021, when the shots began rolling out. And even though rich countries pledged to donate more than a billion worth of vaccines to low- and middle-income countries, many countries and territories remained antsy. The list of foreign governments that reported using their K Street connections in vaccine procurement efforts thus far this year includes the Republic of Ghana, Kurdistan, the Republic of Trinidad and Tobago, and Barbados.

Often, K Street lobbying firms represent both Big Pharma corporations and foreign governments. Such is the case with TheGROUP DC, whose clients include Pfizer, along with nations such as Trinidad, Tobago, and Barbados.

Under these arrangements, the clear winners are the lobbyists and Big Pharma — who are more than happy about the influx of business the worldwide vaccine push is bringing them.

One aspect of the widespread vaccine mandates that is often neglected in the mainstream media is how they financially benefit the vaccine manufacturers.

You would think journalists who claim to be concerned with the influence of Big Money in politics would take issue with the fact that vaccine makers are spending millions on lobbying to win over policymakers in D.C., and these policymakers then go on to enact mandates that oblige Americans to become customers for those vaccine makers — whether they want to or not.

After all, even if you don’t get the shot, you’re still paying for it out of your tax dollars. Those tax dollars go right back into the pockets of Big Pharma. 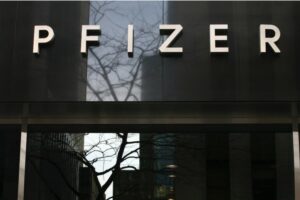 PrevPreviousTeens and Young Adults Driving Record Cov Cases in US, Health Officials Say
NextWhat You Need To Keep the Spike Protien Under Control, This Is Your Ticket Out of This MessNext