“What makes Truth Social different!? We are a social media platform that is free from political discrimination. Join us and share, communicate, and have fun!” the app’s description reads.

The app went live on Feb. 20, at around midnight, and automatically downloaded to users’ phones who pre-ordered Truth Social.

The app skyrocketed to No. 1 on the App Store, but users who did not pre-order the app were put on a waitlist before using Truth Social.

However, users are still able to create an account. The notification reads: “Your account has been created successfully! Thank you for Joining! Due to massive demand, we have placed you on our waitlist. We love you, and you’re not just another number to us. But your waitlist number is below.” 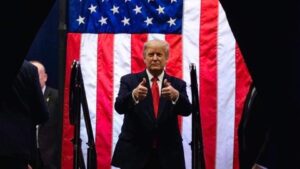 PrevPrevious33% of New Zealand’s C0V-19 Hospitalisations in the Last 6 Months Have Occurred in the Past 12 Days; & the Fully Vaxxinated Account for 4 in Every 5 of Them
NextJulian Assange Absolutely Nails It!Next