FBI documents back up Putin’s claims that the Azov Battalion in Ukraine is indeed a Neo-Nazi group.

Putin claimed one of the reasons that Russia invaded Ukraine was to eliminate the Nazis in that country. Many in the media wondered what he was talking about. We identified the Azov battalion some time ago and even reported that some elements of that group showed up on Jan 6 at the Capitol. This group was shown on American TV and the announcers had no idea who they were, claiming these guys were getting ready for the Russian invasion.

We have uncovered more information connecting the Azov Battalion to Neo-Nazis. In an FBI criminal complaint in October 2018, the FBI accused four men in Los Angeles of being neo-nazis. These men were accused of essentially being behind riots in the US.

(Note that the current FBI will never do the same for Antifa or BLM members even though they killed people and caused billions of damage in 2020.)

In the filing (page 8) the FBI notes that RAM members (the group the accused were associated with) the FBI labels the Azoz Battalion, who these guys met with, as Neo-Nazis.

On August 1, 2018, an Instagram user “tagged” Right Brand Clothing’s account in a post containing a photograph of RAM members during their trip to Germany, Ukraine, and Italy meeting with Olena Semenyaka, the leader of the International Department for the National Corps, which is a political party in the Ukraine that was founded in 2016 out of a regiment of the Ukranian military called the Azov Battalion. Based on my training and experience, I know that the Azov Battalion is a paramilitary unit of the Ukranian National Guard which is known for its association with neo-Nazi ideology and use of Nazi symbolism, and which is believed to have participated in training and radicalizing United States-based white supremacy organizations.

We noted that 2 of the RAM members were at Charlottesville.  One member got into an altercation with a woman who looks to be from Antifa.

We also know that at least one of those identified by the FBI was in Ukraine and was filmed with one member of the Neo-Nazi group in Ukraine, a woman called Olena Semenayaka. What is the deal with Biden’s Department of Justice, that it will identify Ukrainian Neo-Nazis but ignores them on Jan 6?  Why does it target Americans connected to these groups, many of who are set up, but ignores many of the criminals in Antifa and BLM who terrorized this country in 2020? 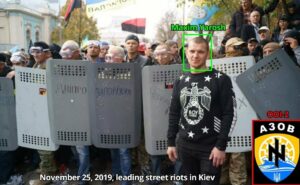