Disagree With Government Policy? Homeland Security Says You’re a ‘Terrorist’ if You Speak Out

Disagree With Government Policy? Homeland Security Says You’re a ‘Terrorist’ if You Speak Out

By The Defender Staff

The U.S. Department of Homeland Security (DHS) on Feb. 7 released a “Summary of Terrorism Threat to the U.S. Homeland” bulletin.

According to journalist and political commentator Kim Iversen, the bulletin “actually labels what is typically considered free speech as terrorism.”

“The United States remains in a heightened threat environment fueled by several factors, including an online environment filled with false or misleading narratives and conspiracy theories, and other forms of mis- dis- and mal-information (MDM) introduced and/or amplified by foreign and domestic threat actors.”

“Remember, this is a bulletin about domestic terrorism threats to the homeland and they’re saying that we’re in a heightened threat environment because of what they label mis- or disinformation,” Iversen said. “Which they’re saying could be spread by American citizens — so that’s you and me.”

We could all be in “hot terrorism water,” Iversen said, for either knowingly or unknowingly spreading misinformation, disinformation or malinformation (MDM) — even though the definitions of those terms keep changing.

Throughout the pandemic, many people accused of spreading disinformation or conspiracy theories turned out to be right all along.

“It was originally a conspiracy theory that there would be vaccine mandates. It was misinformation to say the vaccine doesn’t prevent spread,” Iversen said.

According to the DHS bulletin, people who spread MDM, “are possibly threat actors seeking to exacerbate societal friction to sow discord and undermine public trust in government institutions to encourage unrest, which could potentially inspire acts of violence.”

“So they’re saying that if you spread information that undermines public trust in a government institution like the Centers for Disease Control, or Federal Drug Administration, or the Pentagon or Congress it could lead to violence,” Iversen said.

To prevent these “theoretical” acts of violence that stem from engaging in speech that undermines public trust in government institutions “you could be labeled a terrorist threat,” she argued.

“By issuing this bulletin they’ve effectively given themselves the freedom to halt any dissent they don’t like under the guise of ‘it could lead to violence,’” Iversen said.

“The primary terrorism-related threat to the United States continues to stem from lone offenders or small cells of individuals who are motivated by a range of foreign and/or domestic grievances often cultivated through the consumption of certain online content.”

“So they’re saying it could just be you,” Iversen argued. “You don’t need to be affiliated with a known neo-nazi group or some other flagged organization. If you acting alone to air grievances against the government they deem to be potentially threatening, you could be flagged as a domestic terrorist.”

“COVID-19 mitigation measures — particularly COVID-19 vaccine and mask mandates — have been used by domestic violent extremists to justify violence since 2020 and could continue to inspire these extremists to target government, healthcare, and academic institutions that they associate with those measures.”

“Besides angry parents at school board meetings and angry airline passengers I don’t remember any violent extremist attacks due to COVID,” Iversen said.

She described the bulletin as “pretty alarming” as it labels any speech or government dissent, “or sowing any sort of discord amongst a government institution is potentially domestic terrorism.” 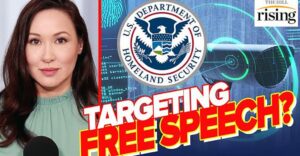