A year before the meeting, Canada’s Joint Task Force Ukraine produced a briefing on the Azov Battalion, acknowledging its links to Nazi ideology.

Canadian officials who met with members of a Ukrainian battalion linked to neo-Nazis didn’t denounce the unit, but were instead concerned the media would expose details of the get-together, according to newly released documents.

The Canadians met with and were briefed by leaders from the Azov Battalion in June 2018. The officers and diplomats did not object to the meeting and instead allowed themselves to be photographed with battalion officials despite previous warnings that the unit saw itself as pro-Nazi. The Azov Battalion then used those photos for its online propaganda, pointing out the Canadian delegation expressed “hopes for further fruitful co-operation.”

After a journalist asked the Canadian Forces about the Azov social media postings, officers scrambled to come up with a response, according to documents obtained by this newspaper through Access to Information law.

Lt. Col. Fraser Auld, commander of Canada’s Joint Task Force Ukraine, warned that a news article might be soon published and could result in questions being asked inside the Canadian government about why such a meeting took place.

A year before the meeting, Canada’s Joint Task Force Ukraine produced a briefing on the Azov Battalion, acknowledging its links to Nazi ideology. “Multiple members of Azov have described themselves as Nazis,” the Canadian officers warned in their 2017 briefing.

Bernie Farber, head of the Canadian Anti-Hate Network, said the Canadians should have immediately walked out of the Azov Battalion briefing. “Canadian armed forces personnel do not meet with Nazis; period, full stop,” Farber said. “This a horrendous mistake that shouldn’t have been made.”

Farber said it was also disturbing the Azov unit was able to use the Canadians in propaganda attempts to legitimize its far-right ideology. Besides its support of Nazi ideology, Azov members have been accused of war crimes and torture.

One gathering that journalists didn’t find out about was a December 2018 event in Ukraine attended by then Canadian Army commander Lt.-Gen. Jean-Marc Lanthier, according to the documents.

Members of the Azov Battalion were present, but, again, instead of denouncing the battalion’s Nazi sympathies, the Department of National Defence and the Canadian Forces focused concern on the possibility that photos might have been taken showing Canadian soldiers with members of the Azov unit.

Chris Henderson, then assistant deputy minister for public affairs, emailed more than 20 DND public-relations officers, worried that photos might appear online. “Do we have a clear expression of CAF policy toward this group?” he asked of the Azov Battalion. “This may or may not prompt questions, but we need to be ready and not come across as being taken by surprise.”

Jaime Kirzner-Roberts, policy director of the Friends of Simon Wiesenthal Center, said Canada had to make it a priority that its military personnel have no involvement with far-right fascist militias in Ukraine under any circumstances. “It’s concerning that, for the second time in a month, we have seen evidence of Canadian military officials engaging with Ukrainian neo-Nazi groups,” she added.

Kirzner-Roberts was referring to a recent report from an institute at George Washington University in the United States revealing that Centuria, a far-right group made up of Ukrainian soldiers linked to the Azov movement, boasted they received training from Canada and other NATO countries. Researchers with the university tracked social media accounts of Centuria, documenting its Ukrainian military members giving Nazi salutes, promoting white nationalism and praising members of Nazi SS units.

In 2018, the U.S. Congress banned the use of U.S. funds to provide arms, training and other assistance to the Azov Battalion because of its links to the far-right and neo-Nazis.

National Defence spokesman Dan Le Bouthillier said the Canadian military was examining its policies on the vetting of foreign troops it trains as well as the information uncovered by the George Washington University report.

He had earlier noted that the 2018 meeting with Azov Battalion members was planned and organized by Ukrainian authorities. Canadian military representatives had no prior knowledge of those who would be attending, he added. Le Bouthillier noted it was the job of the Canadian defence attaché to assess the situation in the conflict zone. “Canada has not, does not, and will not be providing support to Azov and affiliated entities,” Le Bouthillier said.

In 2019, the Soufan Center, created by former FBI agent Ali Soufan, who was involved in a number of counter-terrorism cases, warned about the connection between the Azov Battalion and white nationalists. “In Ukraine, the Azov Battalion has recruited foreign fighters motivated by white supremacy and neo-Nazi beliefs, including many from the West, to join its ranks and receive training, indoctrination and instruction in irregular warfare,” the report outlined.

The Azov Battalion has been formerly incorporated into the Ukrainian military, at least in theory, the Soufan Center report noted. But the battalion has cultivated a relationship with members of the Atomwaffen Division, a U.S.-based neo-Nazi terrorist network, it added. 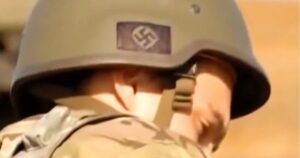 PrevPreviousCrypto Exchanges Refuse To Freeze All Russian Accounts
NextIf US Sportsmen Had Been Banned From Participating in Sports Events Every Time the US Was Bombing Another Country, They Would Have Never, Ever, Taken Part in Any Event!Next