Could four key public health officials have been intimately involved in the creation of the pandemic, as well as the prolongation and improper treatments used during the pandemic?

In early 2020, there was a lot of chatter about where the virus, later named SARS-CoV-2, actually came from.

In an excellent, detailed article written earlier this month for the Bulletin of the Atomic Scientists, former New York Times science writer Nicholas Wade described how two short pieces published in March 2020 — one in The Lancet and one in Nature Medicine — determined how this chatter would be channeled to the public.

These two extraordinarily influential pieces, each published under the heading “correspondence,” were parroted by mainstream media for a year. Both were plainly intended to shut down any discussion of the possibility that the virus originated in a lab.

Listen here as Robert F. Kennedy, Jr. and I discuss these issues:

As I read both the Lancet and Nature papers in March 2020, it became immediately apparent each was designed as a propaganda tool. Neither was based on science.

As I read both the Lancet and Nature papers in March 2020, it became immediately apparent each was designed as a propaganda tool. Neither was based on science.

I was so intrigued by these articles, I searched the web to better understand them. That’s when I discovered Francis Collins, director of the National Institutes of Health (NIH), who had blogged on March 26, 2020, about the Nature article, suggesting the article should put an end to conspiracy theories about lab origin.

“Either way, this study leaves little room to refute a natural origin for COVID-19. And that’s a good thing because it helps us keep focused on what really matters: observing good hygiene, practicing social distancing, and supporting the efforts of all the dedicated health-care professionals and researchers who are working so hard to address this major public health challenge.”

I wondered why five otherwise credible scientists would sign their names to the Nature article — and why Collins would endorse the article’s conclusion — when the arguments made in the paper were nonsensical, in my opinion.

I eventually concluded the authors had been put up to writing the paper by a “hidden hand.”

How had I reached that conclusion, even before Dr. Anthony Fauci’s emails were uncovered Wednesday?

Months ago, in another email drop obtained by U.S. Right to Know, we learned Peter Daszac, CEO of the nonprofit EcoHealth Alliance, was the primary but hidden author of the Lancet article.

Daszac was also the primary beneficiary of the article’s conclusion — that the virus evolved in nature — as his organization had been used as the pass-through to send money from the National Institute of Allergy & Infectious Diseases (NIAID), headed by Fauci, to the Wuhan Institute of Virology, in Wuhan, China. (Some might consider this method of giving out grants as a fancy way of money laundering.)

The WHO and the Lancet thus seem to be co-conspirators, choosing the fox (Daszac) to guard the henhouse (the theory that COVID evolved in nature).

The release Wednesday of Fauci’s emails, obtained by BuzzFeed News through the Freedom of Information Act, help to further clear up some of the mystery behind why five well-known scientists co-authored drivel — which the venerable Nature journal published, and which was then used as the foundation to support the natural origin theory.

One of the emails strongly indicates Andersen, lead author of the Nature paper, knew he was participating in a con job. In a Feb. 1, 2020, email to fauci, Andersen expressed his own concerns about some of the “unusual features of the virus.” Andersen appears to be worried these features suggest laboratory tampering.

But Andersen then reassures Fauci these “unusual features of the virus make up a really small part of the genome (<0.1%) so one has to look really closely at all the sequences to see that some of the features (potentially) look engineered.” 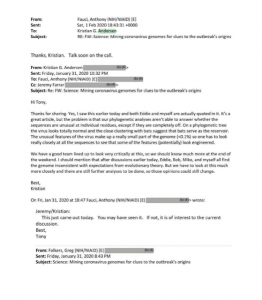 In another email to Fauci, Andersen thanks three incredibly important people — Fauci, Collins and Sir Jeremy Farrar — for their “advice and leadership” regarding the paper. All three are M.D. researchers who dole out more money for medical research than anyone else in the world, with the exception perhaps of Bill Gates. 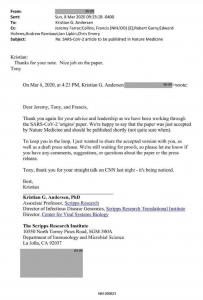 Fauci runs the NIAID, Collins is the NIH director (nominally Fauci’s boss) and Farrar is director of the Wellcome Trust. Farrar also signed the Lancet letter. And he is chair of the WHO’s R&D Blueprint Scientific Advisory Group, which put him in the driver’s seat of the WHO’s Solidarity trial, in which 1,000 unwitting subjects were overdosed with hydroxychloroquine in order to sink the use of that drug for COVID.

Farrar had worked in Vietnam, where there was lots of malaria, and he had also been involved with SARS-1 there. He additionally was central in setting up the UK Recovery trial, where 1,600 subjects were overdosed with hydroxychloroquine.

Even if Farrar didn’t have some idea of the proper dose of chloroquine drugs from his experience in Vietnam, he, Fauci and Collins would have learned about such overdoses after Brazil told the world about how they mistakenly overdosed patients in a trial of chloroquine for COVID. The revelation was made in an article published in the JAMA in mid-April 2020. Thirty-nine percent of the subjects in Brazil who were given high doses of chloroquine died, average age 50.

Yet the Solidarity and Recovery hydroxychloroquine trials continued into June, stopping only after their extreme doses were exposed.

Fauci made sure to control the treatment guidelines for COVID that came out of the NIAID, advising against both chloroquine drugs and ivermectin. Fauci’s NIAID also cancelled the first large-scale trial of hydroxychloroquine treatment in early disease, after only 20 of the expected 2,000 subjects were enrolled.

What does all this mean?

For more background, read by two earlier posts on this subject from March and April 2020. I don’t want to take credit improperly for these discoveries — Dan Sirotkin noticed and wrote about the Nature article before I did, and wrote lucidly about it. I did not see his writing until much later.

US Baby Formula Shortage Is a Symptom of a Broken System