Google’s attempts to persuade people to use ‘inclusive language’ are flawed and intrusive, activists say.

Google announced the tool at the beginning of April, as part of a host of “assistive writing features” for Google Docs users. Some of these AI-powered add-ons suggest more concise and snappy phrases for writers, while others polish up grammar.

However, Google said that with its new ‘inclusive language’ assistant, “Potentially discriminatory or inappropriate language will be flagged, along with suggestions on how to make your writing more inclusive and appropriate for your audience.”

Users soon noticed its prompts creeping into their work and posted screenshots of Google’s suggestions on Twitter. The term ‘motherboard’ is flagged as potentially insensitive, as is ‘housewife’, which Google suggests should be replaced with ‘stay-at-home-spouse’.

‘Mankind’ should be replaced with ‘humankind’, ‘policeman’ with ‘police officer’, and ‘landlord’ with ‘property owner’ or ‘proprietor’. Other technical phrases flagged, Vice reported last week, include ‘blacklist/whitelist’ and ‘master/slave’. 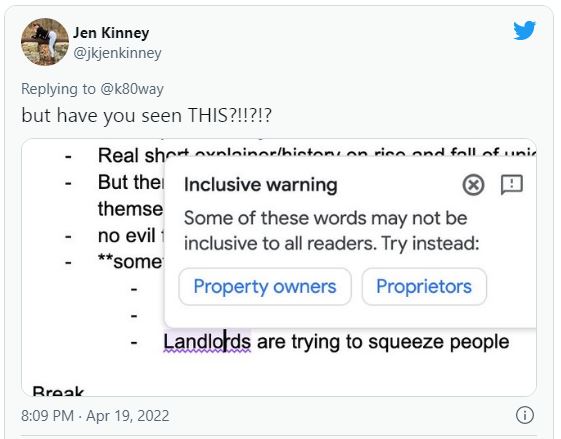 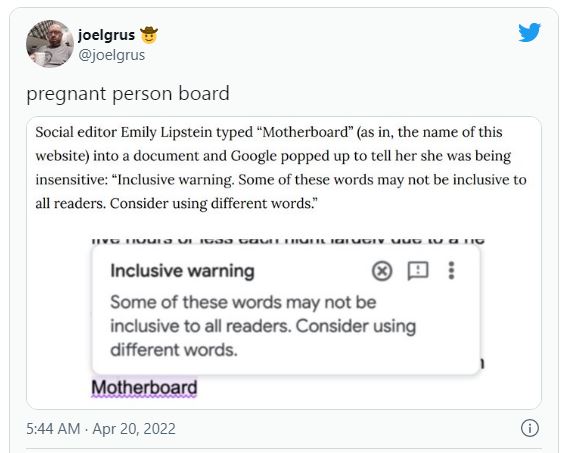 Despite highlighting these common terms as potentially offensive, Google’s assistant placed no warnings on a transcript of an interview with former Ku Klux Klan leader David Duke, in which Duke repeatedly used the word ‘n****r’ to describe black people, Vice’s reporters discovered.

The feature, which can be turned off and is currently available only to corporate users of Google’s Workspace software, has alarmed privacy and anti-censorship activists.

“With Google’s new assistive writing tool, the company is not only reading every word you type but telling you what to type,” Silkie Carlo, director of Big Brother Watch, told The Telegraph on Saturday. “This speech-policing is profoundly clumsy, creepy and wrong… Invasive tech like this undermines privacy, freedom of expression and increasingly freedom of thought.”

Others see the assistant as stifling creative expression. “What if ‘landlord’ is the better choice because it makes more sense, narratively, in a novel?” scholar Lazar Radic asked The Telegraph. “What if ‘house owner’ sounds wooden and fails to invoke the same sense of poignancy? Should all written pieces – including written forms of art, such as novels, lyrics, and poetry – follow the same, boring template?”

Google has required its employees to use this inclusive language in code and documentation since 2020, and has published an exhaustive list of forbidden words. Under Google’s rules, ‘black box testing’ becomes ‘opaque box testing’, ‘man hours’ is replaced with ‘person hours’, and the offhand plural ‘guys’ is strictly forbidden.

According to Google, the AI behind the feature is still evolving, and learning from human input. The end goal, according to a company statement, is to sanitize the English language of “all” bias and discrimination.

“Our technology is always improving, and we don’t yet (and may never) have a complete solution to identifying and mitigating all unwanted word associations and biases,” a Google spokesperson told The Telegraph. 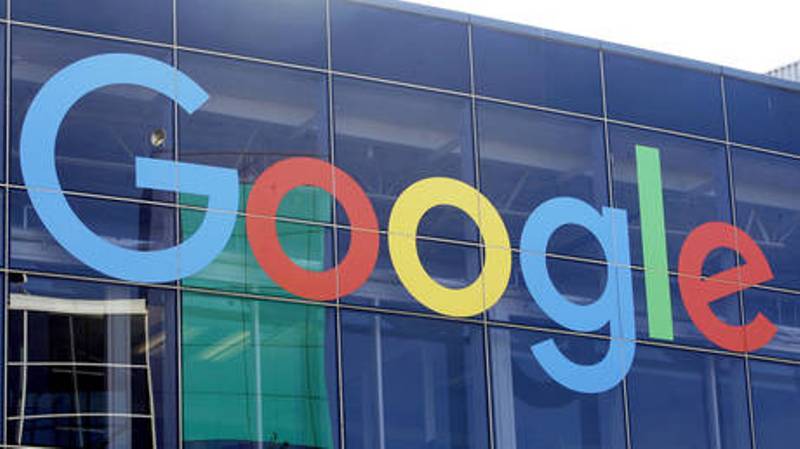 The Truth Group has launched a censor free search engine called TruthLook, www.truthlook.com. It’s a Google alternative and will be ready soon to register before it’s soft launch.

As mainstream media dies, Truth Group https://truth-group.com/ and its platforms rise. Alternate independent media and alternate social media is booming. Every billion in market cap they lose is for the Truth Group to gain.

Some of the Apps are launched already, such as Truthbook.social the alternative to Facebook with tens of thousands of users already posted over 100,000 posts in its short time since soft launch, with many becoming available soon.

Truthcoin is the currency behind Truth Group new apps and it will be listed on selected crypto exchanges in late May 2022 to enable supporters to help fund this critical and much-needed alternate social media platform. Truthcoin set to launch its payment system TruthPay and list early June on Crypto Exchanges as TruthPay and TRP as its Exchange Ticker.

Truth Coin is a large supporter of independent media and “Take back Our World” objectives and it launches its Pre ICO ahead of Early June listing.

Smaller donors can donate $250 or $500 but only qualify to get the coin at $0.15 cents not $0.02 cents. For details on how to access this opportunity, click: https://www.truthcoin.social/truthcoins-ico