How mass psychosis, PR campaigns, and psychological operations have shaped the pandemic.

Unlike the swine flu “fake pandemic” of 2009, covid has been a real pandemic: global excess mortality since January 2020 currently stands at about 20 million deaths or about 16% compared to normal global mortality, caused mostly, though not entirely, by the novel coronavirus. In most countries, the median age of covid deaths turned out to be close to average life expectancy.

Overall, the novel coronavirus has a virulence comparable to a standard influenza virus – similar to the 1957 Asian flu and the 1968 Hong Kong flu, but much milder than the 1918 ‘Spanish flu’ – yet it hit aged populations with widespread metabolic health issues and essentially no pre-existing immunity against this novel virus – in stark contrast to previous flu pandemics, when people over 50 usually had some degree of pre-existing immunity due to prior exposure to similar flu viruses.

Yet in addition to a medical pandemic, covid has also been a propaganda pandemic. The following analysis reviews some of the most important pandemic PR and propaganda campaigns run by Western governments, the media, and intelligence agencies.

By late January 2020, after the coronavirus genetic sequence had been published by the Chinese, leading US and European virologists immediately realized that the novel coronavirus had likely emerged from US or Chinese dual-use virological research and was “inconsistent with expectations from evolutionary theory”, as one virologist put it in a released email.

Yet during a teleconference on February 1 organized by US NIAID director Dr. Anthony Fauci and British Wellcome Trust CEO Dr. Jeremy Farrar – two of the most important sponsors of research in infectious diseases and virology – they decided to run a cover-up and disinformation operation.

Four of the participating virologists immediately started drafting a letter to Nature Medicine, posted as a preprint on February 20, falsely claiming that their analyses “clearly show that SARS-CoV-2 is not a laboratory construct or a purposefully manipulated virus.”

Simultaneously, Dr. Peter Daszak, the CEO of the Pentagon-funded “EcoHealth Alliance” that was performing dual-use coronavirus research in China and other parts of the world, secretly coordinated a second letter to The Lancet, published on February 19, that denounced lab-related hypotheses as unfounded “conspiracy theories”.

These two highly misleading letters were then used by many media outlets and social media platforms to stifle or censor debate about a lab-related origin for over a year, despite the fact that robust (phylo-)genetic data supporting a lab-related origin was already publicly available since April/May 2020.

It was not until a Medium piece by science writer Nicholas Wade, published in May 2021, that public debate began to (partially) shift. In particular, Wade quoted former CalTech president and Nobel Prize winner David Baltimore as saying that a highly unusual CGG double arginine codon within the coronavirus furin cleavage site was the “smoking gun for the [lab] origin of the virus”.

In addition, internal emails released in response to several US FOIA requests began to reveal the behind-the-scenes machinations by Fauci, Farrar and Daszak described above, even though large parts of these emails remain classified due to “national security reasons”.

Of note, US biosafety expert Dr. Meryl Nass, one of the leading experts in the field of anthrax biowarfare, stated in June 2021 that in her opinion, four of the five authors of the misleading Nature Medicine letter were “longstanding government agents” who worked for the US military in addition to their academic science jobs.

Participants in the February 1, 2020, conference call

The collapsing people of Wuhan (January 2020)

Also in late January 2020, images and videos started to circulate on social media claiming to show people in Wuhan “keeling over” or lying dead in the streets (see below).

Many Western media outlets promoted these videos and images, using headlines such as “A man lies dead in the street: the image that captures the Wuhan coronavirus crisis” (Guardian) or “Coronavirus horror: Social media footage shows infected Wuhan residents ‘act like zombies’” (Express).

In reality, most or all of this footage was fake, showing drunk people, homeless people (even in other Chinese cities), road accidents, unspecified medical emergencies, and even training exercises.

Many skeptics have assumed that these fake images and videos were distributed by the Chinese government to scare Western countries into lockdowns, but a closer analysis shows that most of this footage was in fact shared by US-funded NGOs critical of the Chinese regime (e.g. by “Voice of Hong Kong” and Taiwan-based TomoNews US), as well as by major Western media outlets.

The most famous photograph of a “dead man lying in the streets of Wuhan” was taken by AFP/Getty war zone photographer Hector Retamal, who later won several awards for this photograph (see below). French Agence France Press (AFP) is one of only three major Western news agencies and was previously involved in various war zone deceptions (e.g. in Syria).

“A dead man lying in the streets of Wuhan”

Video compilation of people “keeling over”, produced by TomoNews US in Taiwan:

In January and February 2020, many Western governments and media outlets tried to downplay the coronavirus outbreak in China. At the time, politicians and pundits who demanded swift border closures were denounced as “right-wing nationalists”, “anti-Chinese” or simply cranks.

In a notorious piece broadcast on 30 January 2020 by German state television “Bayerischer Rundfunk”, the presenter openly mocked people demanding swift government action (see screenshot below). On February 3, the WHO urged countries “not to close borders to foreigners from China”. As late as March 5, US health experts were still against border closures (proposed by the then US President) and said “the key is dealing with the coronavirus inside the country”.

In late February and early March 2020, the Bergamo region in northern Italy was the first European region to experience a major coronavirus outbreak. On March 19, a notorious video and images of a dozen military trucks “transporting bodies overnight as the local cemetery had been overwhelmed” went around the world.

While the elderly population in parts of the Bergamo region was indeed hit hard by the sudden coronavirus outbreak, the description of the footage showing the thirteen military trucks was highly misleading: at the time, there were not way more deaths in Bergamo than during a strong flu wave, but out of fear of the novel coronavirus it was decided to not bury the bodies – as is customary in Catholic Italy –, but to immediately cremate them (which required out-of-town facilities), and to not transport the bodies by normal undertakers, but by the military.

On the day of the appearance of the Bergamo video, US social media strategist Tomas Pueyo published his highly influential Medium piece titled “Coronavirus: The Hammer and the Dance”, which was translated into dozens of languages and reached over 100 million people.

In addition, the piece called for the notorious “two weeks” of total lockdown (the hammer) followed by months of mitigation measures (the dance).  Pueyo’s model was in stark contradiction to epidemiological reality and, unsurprisingly, turned out to be a complete failure, causing unprecedented damage to both rich and poor countries.

Indeed, in early 2022 a comprehensive meta-analysis found that lockdowns had no significant impact on covid mortality, while the World Bank confirmed that it was lockdowns, not the pandemic itself, that caused an “historically unprecedented increase in global poverty” of close to 100 million people.

Tomas Pueyo: “The Hammer and the Dance”

In response to the misleading images from Wuhan and Bergamo and the highly flawed “hammer and dance” model by Ferguson and Pueyo, many Western governments ignited a war-time panic and propaganda campaign to enforce an unprecedented total lockdown of society.

For instance, a leaked strategy paper of the German government, dated March 22, described in detail how to best frighten the population, including children, in order to get them compliant. The Canadian military launched an “unauthorized” war zone “information operation”, the British government activated the notorious 77th Brigade psychological warfare unit, while the Italian military police launched drones to monitor and enforce lockdowns, as did police in parts of Britain and in other countries.

The months of March and April 2020 were also the apex of the “ventilator panic” – the false idea that millions of ventilators would be needed to intubate covid patients. The idea was based on a Chinese SARS-1 protocol to minimize in-hospital aerosol transmission. The protocol later turned out to be highly counterproductive and likely caused thousands of unnecessary deaths in places like New York and elsewhere.

During this early stage of the pandemic, several rather bizarre claims were circulating online, such as the idea that covid deaths were caused not by the coronavirus, but by 5G mobile phone radiation, which reportedly resulted in dozens of telephone masts being set on fire in the UK and elsewhere, and in turn justified the first wave of mass censorship on social media platforms.

While such bizarre claims may have originated spontaneously, they could also have been part of a “77 brigade”-type disinformation operation to “poison the well”, criminalize opposition to lockdowns and enforce mass censorship.

Still in March 2020, a vast multilingual Twitter bot network started demanding and promoting lockdowns in Western countries (see this analysis). Such bots showed up in Europe, the US, South Africa, India and other countries. In Australia, bots lauded the extreme lockdown imposed by Victoria Premier Dan Andrews. In 2021, similar bot networks showed up again and demanded new restrictions.

Independent analysts generally assumed that these were likely Chinese bots, in part because they were praising the Chinese response in Wuhan while criticizing Western governments. While possible, these bots may as well have been part of a Western operation.

In early 2022, German researchers exposed another highly influential network of anonymous Twitter accounts that pretended to be emergency and intensive care doctors demanding stricter measures and promoting vaccines. In reality, the Twitter accounts were operated by a German PR agency, funded by pharmaceutical corporations, that was promoting and selling “pandemic products”. 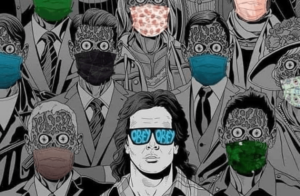 PrevPrevious5G Is F**king Up the Birds…
NextWe Are at the End Days of This Financial System, the “Medical Police State” in Truth Was Erected To Quell Riots As Everything ImplodesNext