Bill Gates: Don’t Get Too Comfortable, Another Pandemic With New Pathogen Is on Its Way

Bill Gates: Don’t Get Too Comfortable, Another Pandemic With New Pathogen Is on Its Way

During Germany’s annual Munich Security Conference on Friday, CNBC’s Hadley Gamble asked Gates, “How confident are you that we, as a global community, will deal with the next global pandemic better?”

“Well, there were a lot of people after the Ebola epidemic who were talking about what needed to be done, and in this pandemic, the countries that had exposure to SARS-CoV-1 were amongst the outliers,” Gates declared.

Gates went onto praise Australia’s authoritarian crackdown on civil liberties during the pandemic, and urged other nations to adopt the same approach in the future.

“So, Australia is a true outlier,” he said. “They orchestrated diagnostics, they executed quarantine policies and they have a death rate in a different league than the other rich countries.”

“We’ll have another pandemic. It will be a different pathogen next time,” Gates boasted.

Infowars.com reports: Regarding Australia’s drastic and inhumane Covid measures, Gates noted, “Everybody had the capability to do that. They have less PCR machines than other rich countries, they have more travelers coming from China than other countries.”

The Microsoft co-founder cited the millions of deaths, the economic toll, lack of schooling, depression, overdose deaths and other negative effects of lockdowns as results of Covid, not government policies.

Gates claimed, “The cost of being ready for the next pandemic is not super large,” adding, “It’s not like climate change where you know 10 trillion, 20 trillion, these are big numbers.”

According to Gates, “Global surveillance capability would cost a billion a year. The RND that we need to do to get magic vaccines and diagnostics and therapeutics, you know that’s less than 100 billion over the next decade. So, if we’re rational then yeah, we’ll catch it early and it won’t go global like it did this time.”

During another segment of the Munich Security Conference, Gates argued that wealthier nations shouldn’t have been pushing the experimental Covid jabs on children who are in less danger from the virus before they got the shots into the elderly populations of poorer countries.

“It’s hard to get the vaccines allocated according to that risk ordering, which would have been ideal,” he said. “Because of the Second Source deal that we helped fund with Serum and AstraZeneca, India actually had a lot of vaccines very early. And, you know, the rich countries had vaccines early.”

Gates’ solution to the dilemma of prioritizing vaccinations is to have the capability to produce 2 doses of a vaccine for every person on the planet.

Asked whether or not it’s possible to prevent the next pandemic, Gates again focused on Australia, saying if every nation did what they did then we wouldn’t be calling it a pandemic.

Basically, unless every nation on the planet becomes a totalitarian hellhole like Australia, we will surely have another global pandemic on our hands despite the fact that Covid was the first one since the 1918 Spanish Flu.

In a bizarre comment, Gates said it was “sad” that the Omicron variant was able to act as a natural vaccine by getting out to the world’s population faster than the experimental vaccines.

“Sadly the virus itself particularly the variant called Omicron is a type of vaccine, creates both B cell and T cell immunity and it’s done better job of getting out to the world population than we have with vaccines…” he explained. 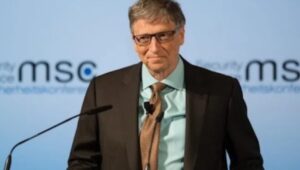 PrevPreviousAll-Out War on Free Speech Launched by United Nations
NextCoinbase CFO Just Dumped 100% of His Stock and the CPO 97%. What Do You Think This Means?Next