“He was down with COVID (last year), and got vaccinated. This comes as a huge shock for all of us.” 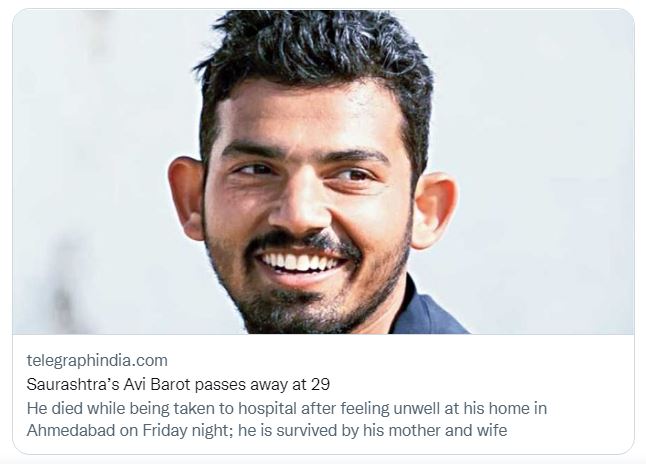 Saurashtra wicketkeeper-batsman Avi Barot, also a former India U-19 captain, died on Friday after suffering a cardiac arrest. He was 29.

Barot, a member of the Saurashtra team that won the Ranji Trophy in the 2019-20 season, died while being taken to hospital after feeling unwell at his home in Ahmedabad on Friday night. He is survived by his mother and wife, who is expecting the couple’s first child.

“Avi was at home when he started feeling unwell. He was being rushed to the hospital, but breathed his last while on way. His father too suffered a heart attack at only 42 years of age,” Saurashtra Cricket Association (SCA) president Jaydev Shah said on Saturday.

“He was down with Covid (last year), and got vaccinated. This comes as a huge shock for all of us,” Shah added.

Barot played 38 first-class and as many List A matches with 20 T20 games. For Saurashtra, he featured in 21 Ranji Trophy games, 17 List A matches and 11 T20 appearances. The Ranji final in March 2020 was his last first-class match.

Kelly Bee
They virtue signaled for over a year and burnt themselves out.

Colleen Kerr
No way because there are HUNDREDS if these cases already but the media will not report it!!

Mike Glass
As the government medical teams would say, he took one for the team.

“K”Natasha_KC1
My heart is still wrecked after covid last March. I remember talking to my cardiologist & this was very early into the pandemic, before the public knew of pericarditis/myocarditis links & he said they will be long term snowed under as the long term damage starts unraveling.

Earlytreatment saves lives
Blood clots are the immediate risks. Then there is the medium term risks of increased cancer cells and cancers…stats of lab subjects and incidents of cancer will be known by 2022 August.

PrevPreviousPulmonary Hemorrhage Kills Newborn Babies of Vaxxinated Mothers!
NextIs It Any Stretch To Imagine the Same Thing Happening Here in Australia if We Are Using the Same Vaxxinations, With Most Adverse Reactions Not Being Reported to the TGA?Next